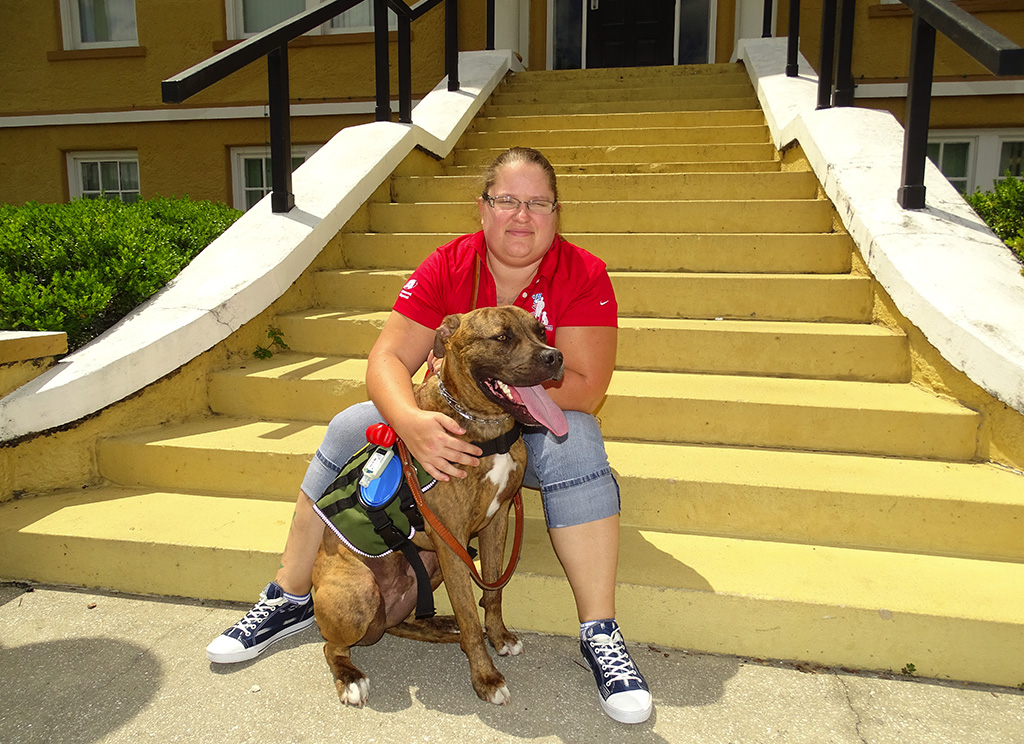 Not long ago, Tiffany Bires couldn’t bear to enter a crowded store, go out into the community or even sit through an entire college class without being overwhelmed by anxiety.

Bires, a DeLandite and U.S. Army veteran, is one of nearly 8 million Americans afflicted with post-traumatic stress disorder.

Now, thanks to a gregarious mastiff-mix named Stryker, she has more confidence than ever. Stryker came from K9s for Warriors, a Ponte Vedra nonprofit that provides and trains service dogs for veterans suffering from PTSD, traumatic brain injury, and military sexual trauma.

“It’s been really great,” Bires said. “I can actually walk into Wal-Mart by myself now. I go to class during the day, and … before I had him, I would leave halfway through the class.”

Her road, however, has been a difficult one. After serving in the Army for four years repairing small arms and artillery, and attaining the rank of specialist, Bires was discharged in 2014 for medical reasons, after a 70-pound automatic weapon fell backward onto her.

“My whole bottom half is out of alignment,” she said.

After her discharge and PTSD diagnosis, she did some research on options that could help smooth her return to civilian life.

She came across K9s for Warriors, and gave them a call.

“I applied, and I waited for about 18 months,” Bires said. “I went through the program. I was only there for a week, and I had to come home. I emotionally was not ready.”

About a year later, she tried again.

“I went back to the program, and I finished,” Bires said.

She explained how the K9s for Warriors program works.

“The first day you get there, it’s a Sunday. You kind of meet everybody; you meet some of the staff,” she said. “Monday morning, you wake up, you have breakfast, you go through a class. You have lunch, and after lunch, you meet your dog.”

Initially nervous about going into the program again, Bires felt a bit better after meeting Stryker.

“I was kind of hesitant. I didn’t think the program would work, but as soon as I saw my dog, I felt a little bit better about it,” she said. “As the days went by, I would say like a week into it, I noticed the difference.”

Each of the dogs is trained by professionals before being paired with a veteran. The 21 days the dogs and veterans spend together allows them to get acquainted and used to going out in public.

The dog-warrior duos went everywhere from Costco to the Jacksonville Zoo. The excursions were as much for the veterans as they were for the dogs, Bires said.

“Some of us, before we got to the program, we didn’t go out really,” she said.

Bires and Stryker graduated March 21, alongside seven other warrior-dog teams, and returned to DeLand.

The program is free for veterans, except for travel expenses to and from the group’s Ponte Vedra campus. While K9s for Warriors has the capacity to pair 192 warrior-dog teams each year, there is still a roughly two-year-long waitlist for veterans.

Most of the dogs the program trains are rescues from shelters. The dogs are often named, like Stryker, after companies that sponsor their training.

“We’re not just providing them with the service dog, but they become a part of our family,” said K9s for Warriors Education Manager Samantha Epstein. “From the moment they walk into the doors here, they receive home-cooked meals from our volunteers and the support of our community. We have comfortable lodging here and just an abundance of resources.”

Epstein said during the 21 days a veteran spends bonding with his or her dog, the veterans gain the ability to trust once again through their newfound family, and through their new canine friend.

“I think there’s something that dogs can offer that people can’t. I’ve heard veterans say that they offer a nonjudgmental form of therapy,” Epstein said. “A veteran can be having a bad day and having so much anxiety, and a dog can just come up and lick them on the face and make things so much better.”

Even given the long wait, Bires would recommend the program to any fellow veteran struggling with similar problems.

“Not only do you get a dog, but you get family too,” she said.