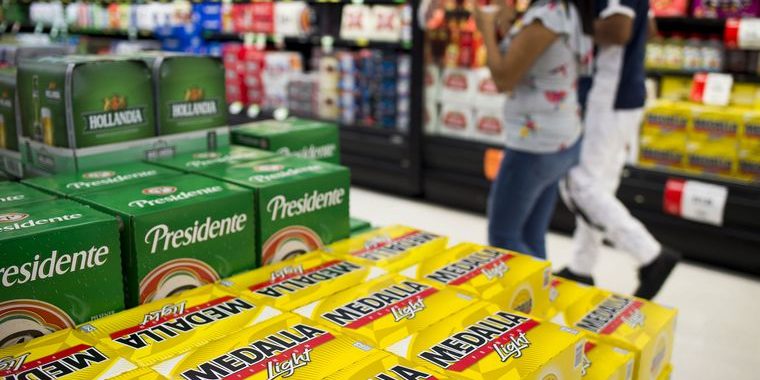 Puerto Rico’s biggest brewery had a problem: Beer demand was plummeting, the population was shrinking and Hurricane Maria had shut at least 1,000 retailers and bars that poured its product.

So in March, the maker of Medalla hired a distributor and started selling its cheap and ubiquitous lager on the mainland. Now, the family-owned company says the experiment is going so well that it can’t keep up with demand. It’s upgrading its plant.

A year after the hurricane, an exodus is reshaping Puerto Rico’s economy, prompting local brands to join the rush or risk demise on an island trapped in a downward spiral. Puerto Rico’s export economy has always been significant, accounting for some $61 billion in goods and fueling a $14 billion trade surplus. But three-quarters of all shipments are of pharmaceuticals and medical supplies, and the emphasis on home-grown consumer brands is a storm-born phenomenon.

For many companies, the initiative is natural. For every consumer lost locally, markets in the Puerto Rican diaspora — led by greater Orlando — gain one. Even before Maria, the migration was well under way, with population dropping by about 60,000 people annually on an island of just over 3 million. Then, the storm briefly spiked the pace to more than 200,000.

“The Puerto Rican exodus to Florida after Hurricane Maria was a catalyst that opened doors for us,” said Jorge Bracero, chief marketing officer of the Cerveceria de Puerto Rico brewery, which has been in operation since 1937.

Bracero declined to say how many cases he’s selling in Florida, but said overall production is up despite the contraction at home. Distributor Titan Products is selling the beer at Florida Walmarts, Walgreens and Sam’s Clubs, as well as at specialty retailers in other states.

The trend includes Meson Sandwiches, the San Juan-based chain with 37 stores in Puerto Rico. El Meson first brought its sandwiches to Florida in 2015, as the state’s Puerto Rican population surpassed 1 million, and it hasn’t turned back. Now, a year after Maria, it’s poised to open its fourth store, with a fifth by 2020.

At a location in Kissimmee, about 20 minutes from Walt Disney World, breakfast accounts for half the 600 meals served on an average weekday. There is avena, or oatmeal, cornmeal porridge, grilled cheese bocadillos and cortados, espressos with a few drops of milk. For lunch and dinner, there are sandwiches like the Meson Special, with chopped pork, corned beef or slices of turkey.

During a recent Wednesday lunch rush, Alejandro Lotti, 43, finished up his sorullos — fried corn-meal sticks — and reminisced about Ponce, Puerto Rico, where he was born and raised, and the many Meson sandwiches he consumed.

“This brings back memories,” said Lotti, who in 2005 moved to Orlando, where he services pools and manages vacation properties.

“It’s something about the meat, how they prepare it and slice it,” he said. “But it’s really just how well known Meson is over there, back home. And opening here was really smart because there are so many of us Puerto Ricans here in Orlando, and so many more every day since Maria.”

Felipe Perez Grajales, chairman and son of the 46-year-old firm’s founder, said nostalgia was partially to credit for 200-person lines when the company first opened in Florida. But now he said at least 40 percent of the clientele is non-Puerto Rican, non-Hispanic Orlando-area residents. “Puerto Ricans have served as ambassadors of our brand,” he said.

Perez Grajales said he may seek a local partner to add capital and expertise for a broader expansion.

Other Puerto Rican companies are expanding in Florida, too. Thirty-year-old Global Mattress — the island’s only local bedding manufacturer — in August opened its first store in the state and has added two since, with another two on the way before year-end.

PRISA Group, a island developer known for its Hyatts and its luxe Dorado Beach Ritz-Carlton Reserve, has expanded its hotel footprint to the mainland over the past two years. It has invested $85 million in three hotels, and plans $37 million in additional spending on a fourth. It also moved four “top managers” to Orlando. It financed the expansion with none other than Banco Popular, the island’s biggest lender, and a company that has itself hedged its Puerto Rico bets with Sunshine State locations.

Both El Meson’s Perez Grajales and Federico Stubbe, chief executive of PRISA, said there was a downside to running a business in Florida: finding workers. Puerto Rico’s unemployment rate is at 8.8 percent, and its workforce participation rate is as bad as Syria’s. Meanwhile, in Florida unemployment is running at a rock-bottom 3.7 percent.

“Obviously, Florida presents a lot of challenges of its own,” Stubbe said. “You can’t find people to work. Unemployment is so low that it’s getting hard to find good, well-trained employees.”